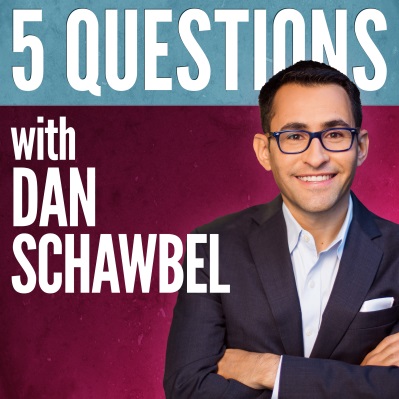 An interview with Guy Fieri about how being a foreign exchange studeshaped who he is today, how he’s stayed true to himself, the impact his dad had on his life, the life lessons he’s taught his children and his best career advice.

Welcome to the 38th episode of 5 Questions with Dan Schawbel. As your host, my goal is to curate the best advice from the world’s smartest and most interesting people by asking them just 5 questions.

My guest today is Food Network star, game show host, restaurateur and author, Guy Fieri. Born in Columbus, Ohio, Guy grew up in California and was a foreign exchange student in France, where he initially discovered his passion about food and cooking. In his early career, he was selling pretzels from his “Awesome Pretzel” cart. In 1990, after graduating from the University of Nevada, Las Vegas, he worked as a manager at a restaurant in California, and then became a district manager at Louise’s Trattoria, managing six locations. Then in 1996, Fieri and his business partner Steve Gruber opened their first restaurant, “Johnny Garlic’s” in Santa Rosa, California. After expanding to multiple locations, they started other restaurants like Tex Wasabi’s and Guy’s American Kitchen and Bar. Guy recently opened Guy Fieri’s Dive & Taco Joint and Guy Fieri’s Pizza Parlor, both in Hampton Roads, Virginia. They will soon open Guy Fieri’s Tequila Cocina in Boston, where I’m from. My foodie friends will be lining up to go! Aside from his successful career in the restaurant business, he won the second season of The Next Food Network Star, earning his first show “Guy’s Big Bite”. His second series, Diners, Drive-Ins and Dives won two Emmy Awards and is currently in its 29th season with 384 total episodes! Guy also hosts two other Food Network shows: Guy’s Grocery Games and Guy’s Ranch Kitchen. This year, after over a decade in the entertainment business, he received a star on the Hollywood Walk of Fame. In this interview, we get personal with Guy to understand where he came from, who he is and what advice he can offer us.