Rodney Scott: Keep Rodney Scott’s World of BBQ by your smoker this summer 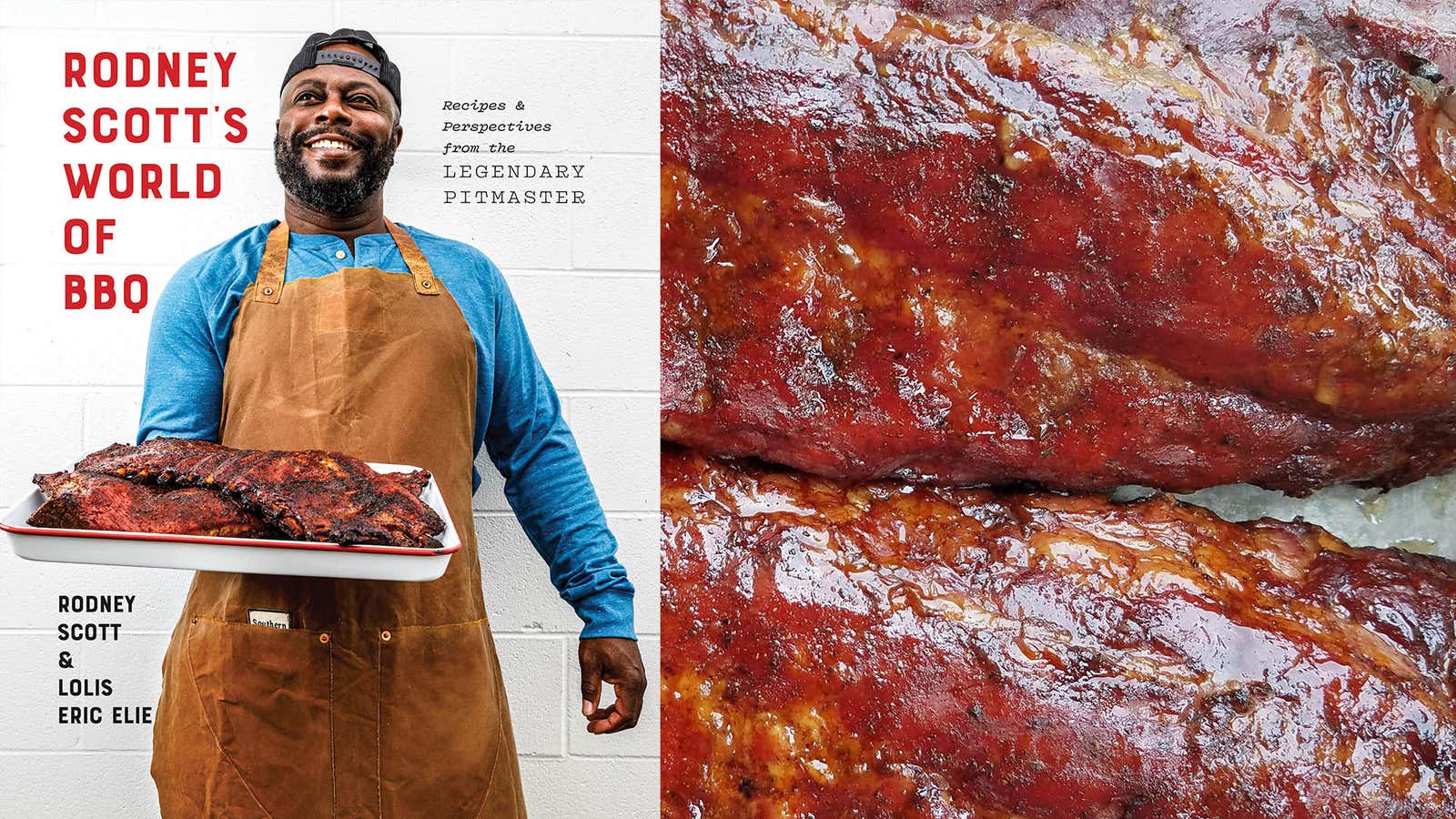 If you’ve ever spent any time reading barbecue discussion forums online, you’ve probably noticed that people have such intense opinions about what constitutes real barbecue that it’s hard not to feel intimidated by the entire prospect. It’s such a revered cooking tradition that I was hesitant to try it myself. I felt like I couldn’t live up to barbecue-lovers’ standards.

I had an electric smoker in my mid-20s that I was able to use exactly two times before some asshole stole it. City living is a whole lot of fun, let me tell you. After that, I gave up.

But recently, I was sent a copy of Rodney Scott’s new book, Rodney Scott’s World of BBQ, and it was so encouraging that I decided to give backyard barbecuing another shot. And honestly? It’s been worth the whole ride. My original plan was to just buy some food and smoke it at a friend’s house, probably while drinking beer and catching up, but Camp Chef was kind enough to send me a pellet smoker (don’t forget to smoke your cream cheese), so I was able to tackle the project on my own.

Scott is a James Beard Award-winning barbecue chef from South Carolina who specializes in whole hog barbecue. Whole hog cooking is already an impressive feat: it takes patience and dedication to tend both the meat and the fire. Live fire cooking is finicky and every cooking session is different (as I learned during my years of cooking woodfired pizza), so I respect the nuances of this craft.

But to build a business out of barbecue is a whole other challenge. About half of Scott’s cookbook is personal essays not only about food, but about how he came up through the restaurant business itself and his difficult relationship with his now-estranged father. These stories help you get to know Scott and make you feel like he could straight up could be your friend. For example, there’s a whole chapter on how much he loves his cars (especially his GMC Denali HD 2500), and another about how much he used to hate the holidays because of all the work that inevitably came with them. It feels like he’s having a conversation with you.

Scott was aided on his path to success with a group of very supportive friends and chefs, including Nick Pihakis, the founder of Jim ‘N Nick’s Bar-B-Q restaurants, who eventually became his business partner. It sounds like Pihakis is the force behind much of Scott’s momentum and eventual stability. With his help, Scott built up his own restaurant chain, Rodney Scott’s Whole Hog BBQ, which has locations in three cities: Charleston, South Carolina; Birmingham, Alabama; and Atlanta, Georgia.

But, of course, this wouldn’t be a cookbook without the recipes. This isn’t a book that’s dense with them, but the ones that are included are outstanding and easy to navigate.

I’m going to say right off the bat that there is one big issue here: I don’t think I’ll ever be barbecuing my own whole hog. You need space, time, muscle (in the form of multiple people), and ideally, someone with experience. I don’t have any of those things. I also don’t think my landlord (or my neighbors, for that matter) would appreciate me starting a pit in our small backyard. Although I’m tempted.

But the good news is, you don’t need a barbecue pit or even a smoker to cook your way through this book. You don’t need any special equipment at all other than a grill, a meat thermometer, and another thermometer that can measure your grill’s ambient heat. For the low-and-slow stuff, you’ll want to maintain your grill at a temperature between 225-250 degrees Fahrenheit. Most of your temperature control can be done via your fuel source and airflow into your grill; Claire Lower from Lifehacker has some great basics for you here, plus you can read about the snake method of grilling via her pork shoulder guide. Scott also has a little run-through of it in the book, which should get you on your way.

Right out the gate, I started simply, with the smoked chicken. Fortunately for Mr. Inexperienced here, the Camp Chef smoker has built in meat probes that gauge the temperature of whatever you’re smoking. There’s a phone app that also lets you monitor multiple aspects of cooking. (This isn’t cheating, I swear.)

You can see from the photo above that the pellet smoker won’t turn a chicken skin into a deep brown shellac over the meat, but trust me, the smoky flavor is there (I used a premade pellet wood blend from Camp Chef). I dressed it afterwards with the white barbecue sauce recipe in the book, which had a base of Hidden Valley Ranch dressing, unlike other recipes I’ve seen, which are mayo-based with a lot of cracked black pepper. It was a rich complement to the meat.

I used some of the leftover chicken in Scott’s chicken salad recipe. It was so good, I just forked it right out of the bowl, no bread necessary. I’m excited to try the chicken perloo, a hearty rice and smoked chicken stew that looks like a great one-pot meal.

One of my favorite parts about Scott’s cooking is that he doesn’t shy away from MSG. In fact, it’s a hugely important component of his rib rub, which, despite its name, is used to season many of his recipes. A fellow chef once warned him that the mere presence of MSG was something that should never be mentioned in a kitchen, so eventually as a joke, Scott’s business partner’s son, Nicholas Pihakis, began calling it “Jesus’ Tears.” The code name stuck. (By the way, Hidden Valley Ranch also has MSG in it, which is one of the reasons it’s a perfect fit in the roster of ingredients within Rodney Scott’s World of BBQ.)

I made some baby back ribs with Scott’s rib rub recipe and they turned out stellar. (The recipe is for spare ribs, which is also my preference, but there a was buy-one-get-two deal on baby back racks at our grocery store, so how could I resist?) My family housed them, and not once did they reach for—or even ask for—any sauce. Though there’s no recipe for pork shoulder in the book, I made some using the rib rub, and then pulled it and dressed it with Scott’s vinegar-based sauce, known as Rodney’s Sauce. The recipe yielded just enough to coat the rich meat with a cutting, slightly spicy, acid kick.

Of the book’s side dishes, the recipe for corn on the cob caught my eye. It’s called King Street Corn, and it’s a riff on elotes (Mexican street corn on the cob, slathered in mayo and sprinkled with Parmesan cheese and chives), but Scott makes it even more decadent with a crust of crumbled pork cracklings. The result was hearty but sophisticated and makes one hell of an impressive side. Be sure to eat it quickly, as the cracklings get soggy pretty fast. Fortunately, eating it fast is not hard.

Scott includes recipes for other standard sides, including coleslaw, potato salad, and collard greens (which Scott humbly admits he’s never been a fan of). There are also desserts, like an apple hand pie, and cocktails, one of which contains a small amount of Rodney’s Sauce.

Aside from barbecuing a whole hog, there isn’t a recipe in the bunch that I’d consider too challenging for a home cook, and it’s such a well-rounded collection in terms of recipes that I’d easily recommend it to anyone.

Now that we’re well through July, smoking season is starting to die down a bit, and you might wonder whether it’s even worth investing in a new barbecue cookbook. It is. I’m going to be cooking from this thing for many summers to come, and frankly, so should you.