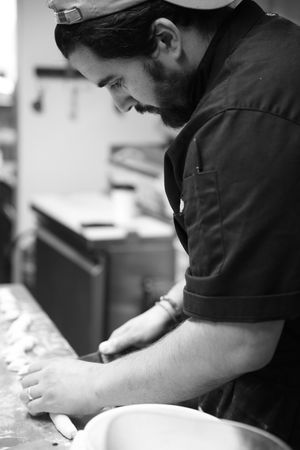 Meny Vaknin, who immigrated to the United States from Israel 12 years ago, is the owner and executive chef of MishMish Café in Montclair, New Jersey (215 Glenridge Ave). He graduated with honors from the prestigious French Culinary Institute before working in some of New York’s acclaimed restaurants. In 2011 Meny helped open renowned chef Daniel Boulud’s Boulud Sud, and then served as executive chef at Pera Soho and Grata on the Upper East Side in Manhattan before helming the kitchen at Eastwick in Williamsburg, Brooklyn.

Yearning to cook in his own restaurant with a menu inspired by his Israeli, Jewish-Morroccan roots, Meny opened MishMish Café in December 2014. At MishMish, Meny marries the French techniques and expertise he learned in culinary school, with the flavors, ingredients, and memories of his childhood. Notable favorites from the menu include Shakshuka, Charred Spanish Octopus with fennel puree, warm chickpeas, grapefruit, and marcona almonds, Charred Shishito Peppers with Maldon sea salt and olive oil, and Smoked Eggplant Dip with feta, lemon confit and za’atarwhich was named one of Time Out New York’s “100 Best Dishes of 2013″ during his tenure at Eastwick. Mishmish is open Tuesday – Friday for breakfast, lunch, and dinner; Saturday for lunch and dinner; and Sunday for brunch and dinner. In June 2015, Meny demonstrated his culinary talents as a contestant on Food Network’s Chopped, beating his competition to earn the $10,000 prize.