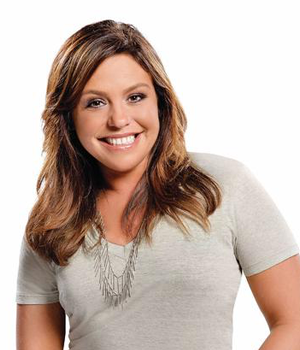 According to Rachael Ray, she grew up in food. “My first vivid memory is watching my mom in a restaurant kitchen. She was flipping something with a spatula. I tried to copy her and ended up grilling my right thumb! I was 3 or 4,” says Rachael, who insists that cooking is a way of life she was simply born into. “Everyone on both sides of my family cooks”

Rachael has parlayed that birthright into a wildly successful career as a syndicated television star, an iconic Food Network television personality, bestselling cookbook author, Founder and Editorial Director of her own lifestyle magazine and Founder of the Yum-o! organization.

Rachael’s hugely successful syndicated daytime program, Rachael Ray, launched in the fall of 2006. Showcasing Rachael’s warmth, energy and boundless curiosity, the show—produced by CBS Television Distribution and Oprah Winfrey’s Harpo Productions—invites viewers to experience life the Rachael Ray way. Credited with getting America back in the kitchen with her easy approach to cooking, Rachael takes the same philosophy—finding simple solutions to everyday problems—beyond the kitchen and into all aspects of the show. Growing up in a family steeped in culinary tradition, Rachael was exposed to a wide range of cooking techniques, from her maternal grandfather who grew and cooked everything his family of 12 ate, to her dad’s family, which embraced the food-rich traditions of Louisiana. The Ray family owned several restaurants on Cape Cod, Mass., before relocating to upstate New York, where her mother worked as the food supervisor for a restaurant chain. “I was surrounded by all different styles of cooking and worked in the food service industry in just about every capacity you can imagine,” Rachael says.

By her early twenties, Rachael developed a hankering for city life and moved to New York where she landed at Macy’s, working first at the candy counter and then as manager of the Fresh Foods Department. She credits her two years there for giving her an education in gourmet foods. After Macy’s, Rachael helped open Agata & Valentina, the prestigious New York gourmet marketplace, where she was the store manager and buyer.

Despite the exciting lifestyle in the foodie circles of New York City, Rachael decided to move back to upstate New York and start managing pubs and restaurants at the famed Sagamore Resort on Lake George. From there, she was recruited by Cowan & Lobel, a large gourmet market in Albany, to be their food buyer and eventually their “chef.” As a way to increase grocery sales during the holidays, Rachael created a series of cooking classes, including a course promising to teach 30-Minute Mediterranean Meals, which exploded in popularity. The CBS station in Albany-Schenectady, WRGBTV, discovered Rachael and signed her on to do a weekly 30-Minute Meals segment for the evening news. Nominated for two regional Emmys in its first year, the segment was a major success; a companion cookbook sold 10,000 copies locally during the holidays. With that, a franchise was born!

Rachael’s television work grew to include a series of lifestyle and travel segments as well as a long-term relationship with the Food Network, hosting shows such as Rachael’s Vacations, Tasty Travels, $40 A Day, Inside Dish and 30-Minute Meals, the latter of which earned Rachael a 2006 Daytime Emmy Award for Outstanding Service Show and a nomination for Outstanding Service Show Host.

Taking the can-do spirit of her television shows and books, Rachael launched a new lifestyle magazine in 2005 bearing her vision called Every Day with Rachael Ray. With great food at its heart, the new full-size glossy magazine, for which Rachael serves as editor-in-chief, covers much more than food. The magazine offers smart and easy recipes for an array of delicious foods, as well as practical advice on food destinations and entertaining. Through the magazine, Rachael takes readers around the country to meet people who love food—from top celebrities and authentic artisans to great home cooks. In 2006, Every Day with Rachael Ray was named Launch of the Year by Advertising Age, won AdWeek’s Hot List in 2007 for “Start Up of the Year,” and was named to Advertising Age’s “A-List” in 2008.

In the fall of 2006, Rachael launched the daily one-hour, nationally syndicated show Rachael Ray, which scored the highest rated premiere for a syndicated talk show since the 2002 launch of Dr. Phil. It immediately secured its position among the top ranked daytime shows and was the #1 syndicated strip launched in the 2006-07 season. The daytime talker was immediately embraced by critics across the country. Time magazine wrote, “You can’t attract her kind of following by just being accessible. Ray, like Regis Philbin, is gifted at being on television.” Newsweek praised Rachael as being “the most down-to-earth TV star on the planet…” People magazine named Rachael Ray one of the top 10 shows of 2006, and Forbes voted her #2 “Most Trusted Celebrity.”

The positive praise from the press and the remarkable season one ratings confirmed Rachael Ray as a syndication success and in January 2007, the show was renewed through 2010.

“My life has been a total accident—a very happy, wonderful accident that I didn’t and couldn’t have planned,” says Rachael. Despite her growing celebrity she is determined to stay grounded and hold on to her down-to-earth values. She still spends as much time as she can at her cabin in the Adirondacks with her husband, John, her family—the “research team”— and her beloved pit bull, Isaboo.

In the spring of 2007, Rachael Ray launched a nonprofit organization, Yum-o! that empowers kids and their families to develop healthy relationships with food and cooking. By providing the tools to create easy, affordable and delicious meals, Yum-o! is changing the way America eats. Yum-o!’s three work areas include educating kids and their families about cooking, feeding hungry American kids and funding cooking education and scholarships. For more information about the Yum-o! organization, please visit www.yum-o.org.

Many say that Rachael, host of four shows on Food Network, author of 11 successful cookbooks,daytime talk show host and Editor- in-Chief of a self-titled magazine, is everywhere. The Brooks Group, who handled Rachael’s publicity for more than 3 years, began working with her in 2003 with the goal of bringing Rachael from Food Network star to household name. Tenacious and targeted pitching led to media coverage in national magazines and newspapers as well as radio and television features. Memorable placements include a cover story in The New York Times Dining section, a multi-page feature in People, a cover story in American Profile, USA Today, Associated Press and several appearances on The Today Show, Late Show With David Letterman, Good Morning America, The Oprah Winfrey Show, Live With Regis & Kelly, and The View, among others.

The Brooks Group, who accompanied Rachael on her national book tours, garnered publicity that showcased not only her expertise in quick cooking and time-saving tips, but also her knowledge about lifestyle topics such as travel, entertaining, style, décor and more. Leveraging the firm’s solid relationships in beauty, Rachael has appeared in magazines like Glamour, Redbook, O The Oprah Magazine, Woman’s Day and Elle. 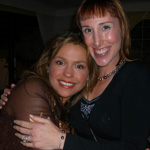 Rebecca and her team get the job done: When I thumb through magazines at the hairdresser and doctors office, I get scared because I see myself “everywhere”. I would have to say my PR is too good — I even get stopped in toilets!

The agency is filled with people you actually want to talk to and get calls from. I think that’s the advantage — there are no caricature “PR Vipers” at Brooks Group. Rebecca has become so much a part of the family, she came to my wedding — in Italy, where “family” means family!