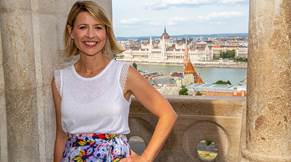 During her 20-year career, TV personality Samantha Brown has ticked off 250 cities in 74 countries on her “where to travel” list. And she keeps crossing off more.

The third season of PBS travel show Places to Love, which debuts January 11, takes Brown to new destinations ranging from Budapest to the British Virgin Islands.

Forbes Travel Guide talked to the television host and intrepid explorer about her first-time experiences, where to go in 2020, tips for solo female travelers and a scary encounter she faced during her own trip.

What are some of the best under-the-radar winter destinations?

I love Sonoma County as a great winter destination. Most people think of that in summer and, of course, into the harvest season.

Sonoma has wonderful Christmas festivals, holiday festivals all throughout February. I believe there’s even a chowder festival. I think it’s cabernet season as well.

I think they have their restaurant week in [February]. That’s when a destination is sort of experiencing its lowest tourism, so they try to drum up business by having restaurant week. Those are always good times to plan in a destination because then your hotel is less expensive, maybe your airfare is less expensive. I love that ability to save money in what’s considered a luxurious place.

No. 1 is to leave plenty of time because time is your No. 1 stressor, especially when getting to the airport.

Quebec. We’ll be shooting in Quebec for season 4. We’ve already started planning that. So Quebec City and also we hope Puerto Rico.

Puerto Rico suffered devastating hurricanes, and we’re really starting to see it come back in a way that travelers can effect even more and greater change. So, we’d like to focus on Puerto Rico.

Speaking of which, in your upcoming season, you’re visiting areas that have been hit by natural disasters, like the Florida Keys, the Virgin Islands and Sonoma. What made you decide to feature these places?

It’s something that I love to do. A place has tremendous upheaval and they’re back, and yet the perception of the place is that it’s torn apart, or that the hotels aren’t open or maybe it’s not a good place to be. It takes a long time for people who have ingested so much of the news and so much of the devastation to change the images in their mind.

I am first and foremost an advocate of travel, and I think those places are some of the best to go to as soon as you possibly can. The people will help you see more because now tourism is coming back. It’s a good way to support these communities and these economies that rely so heavily on tourism. These episodes are really to change people’s perception.

And how are those places faring?

The BVIs — this was my first time I’ve ever been there, and it just knocked my socks off. God, it’s gorgeous. We focused on a group called Seeds of Love. And this is in the Virgin Gorda, which is a huge destination because it has those incredible boulders that kind of create their own pools within the water, and tourists love to go there. What they’re doing is replanting the island, and as a traveler, you can take part in that effort and plant your own coconut tree and that, of course, will embolden the island to survive another hit. It’s really plant life that brings an island together and takes the hit. So, it’s important that the flora comes back.

Where we saw the most in terms of people pointing it out to me was in Tortola. Tortola has beautiful sands and mountains. I guess it took all of the tree life out.

The islands that we visited were just stunning. That was a place that was — my gosh — I mean, just devastated, absolutely devastated. But there’s no reason to put off any travel there.

Among the places you visited in season 3, what were some destinations you enjoyed discovering or rediscovering?

We went back to New Zealand — we were in New Zealand for two episodes in season 2. I just fell in love with that country. We explored the South Island. This is where so much of the dramatic nature that New Zealand is known for is located.

We landed a helicopter on a mountainside that Peter Jackson shot Lord of the Rings on. And we joined what’s called a mail boat, which goes out to what’s called Marlborough Sounds, that delivers mail to people who live incredibly remotely. Sometimes there’s no electricity, but they still get their mail once a week. And you as a traveler can help deliver mail.

Just being in New Zealand — I feel like it’s like my second home. They are the loveliest people you’ve ever met. I would describe it as everyone who lives there has had to travel far, even the original people, the Maori, traveled there in outrigger canoes. And so, there’s a tremendous respect and warmth toward anyone who’s visiting the islands because they all there for one reason: it’s a beautiful place.

Our very first episode is Budapest. And I was just blown away by what an incredible city that was. And it’s just this vibrant, energetic, youthful city that I wasn’t expecting.

A trend on the upswing is female solo travel. What are your tips for women who want to travel by themselves?

Obviously, women are the ones who do all of the planning. So, I know how this takes place: Women try to get their spouse, significant other, partner, best friend or whoever to come, and then they are like no, and they go, “Well, watch me go by myself then.” I love that.

Safety is on top of every woman’s mind when she’s traveling alone. And obviously, speaking as a woman who is alone a lot, [I look for a] friendly place to a single female. While I think there are certainly places that are safer than others, there are a few rules that I’ve got. And that is when I’m off walking, I never wear earbuds. I never put anything in my ears. I’m very aware of my surroundings.

I love trying to engage with people. But if people, especially a man, start the conversation with me, I know that. I always keep that in the back of my head. And that’s it. It never trigged anything that I’ve had to be worried about, but I’m a little suspicious.

The other thing is to trust your gut. I feel like your gut knows more about your safety than any concierge or front-desk person or any tour book you’re reading. If you feel that something is wrong…even if you walk into a busy restaurant, just leave. Absolutely leave and get out.

Have you ever had a situation where you felt unsafe?

I had a situation a long time ago, actually—knock on wood, I haven’t had any since. It was a good 12 years ago. I was in Belize City, and very few people are there. Usually, you go to Belize City and you’re either on a cruise ship that’s departing and you hang out at their own cruise ship village or you arrive there and head out immediately to one of the eco-lodges, which Belize is famously known for.

But we were in the city, which is a little rougher. I remember asking the front-desk clerk at my hotel, which was this just this tiny little hotel, “I want to go into the city. Is this route okay?” This was broad daylight. She said, “Absolutely.” So, I started walking, and I turn down the street, and I immediately felt something was wrong. But it was my only day in the city, and I write the show, I’m the host of the show, and I can’t just stay in my hotel.

I walk down the street and very quickly I was surrounded by a group of about 15 men. They started pushing me and saying things, intimidating things. I thought, “Wow, I am surrounded.” Then they all went away. They were just picking on me. It felt pretty aggressive. It was very unnerving.

What I took from that is that I knew without a soul on the street that there was something wrong. I always appreciated that moment because it taught me to trust myself.

I love to walk alone. I’ve been told not to walk alone in Rio de Janeiro, and I have and had wonderful experiences.

I think there are things you can do. You don’t draw attention to yourself. I think Americans have a tendency to dress in bright colors, and I think you want dress down and wear earth colors. You certainly don’t want to wear a lot of jewelry that would attract anyone.

But there’s great places where I really felt the opposite of fear, where people were looking out for me. They would engage in conversation with me because I was alone. That is the benefit of when you travel alone, is that you don’t have a partner in crime so you have to open yourself to other people. And people take you under their wing a little more.

What are good destinations for women traveling solo?

If you want an adventure destination — where you’re hiking alone and will be fine — New Zealand tops the list; Vancouver, Canada, going down the mountains in that region; Switzerland. These are all countries where you’ll be safe and where it’s not odd to be a woman alone — it’s totally normal.

That’s the key: you don’t’ want to be abnormal. Sometimes a woman alone seems abnormal, unfortunately, and then you’re a target.

In Asia, anywhere in China, you are gonna be fine. Xian is one of my favorites. If you’re looking for more of an urban getaway, I love Xian — that’s where the terra cotta warriors are. And what I love about Xian is that it’s a walled city, so you can walk for hours, hit the wall and just turn around and go back. Where, in Beijing, you can walk and, all of the sudden, you’re like, “Where am I?” Xian is a little more contained.

My third favorite place for the female traveler would be Tokyo. What I love about Tokyo — again, I was alone there at night — is that most of the eating establishments have little bar seats where you can sit and have some ramen or noodles. It’s really for the solo person.

I live in New York City and waited on tables for 10 years. And I love the fact that New York City is a group of people who love to eat alone. As a waitress, I loved waiting on them. I thought, this is what you do, you take yourself to dinner. There are places, like Italy, where you’d never do that.

Another great city destination, I think, would be Vienna. Oh, it’s fantastic for a solo female traveler.

Again, I am alone a lot, and I have always loved being a solo female traveler because you get to do what you want to do. You don’t have to deal with a boyfriend or best friend who’s grumpy. There’s so many benefits.

If there’s anyone on the fence, just do it. Start off somewhere that’s perfectly safe, so there is no sense of fear. You’ll have a great time. It’s the best trend in travel today — solo female travel.